Summer Away from the Sea

Summer Away from the Sea
Jaron Scott Explores India 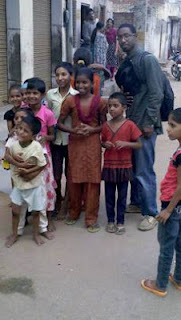 This summer Hamptonians are completing internships and jobs throughout the country and abroad. Whether they are in Hampton,Va. or as far as China, they are applying the valuable lessons they’ve learned at their Home by the Sea. This series of blogs will feature undergraduate and graduate students, who are doing something noteworthy this summer.

Jaron Scott has gained a new outlook on the world from his experience studying abroad in India. Scott is a senior, political science major from Hampton, Va. who has spent part of his summer studying the Hindi language and micro-finance through a program with the Mid-Atlantic Consortium-Center for Academic Excellence (MACCAE).

Being in India was a very unique experience for Scott. He gained a lot of insight and a new sense of understanding of other cultures.

“Micro-finance is the practice of loaning small amounts of money to poor people so that they may start their own home business or expand their current business. This is used to help alleviate the widespread poverty that plagues India.” This helps underprivileged people generate their own wealth.

“I learned that the best way to help people is to empower them by giving them the means to help themselves,” said Scott.

Scott spent most of his free time in the markets talking to people and in the gym working out. “While working out I had the opportunity to talk to the 25 year old owner of the gym and hear about how he was able to build his fortune by buying and selling houses and other property.”

Adjusting to the new culture was not difficult for Scott. The time difference and the food were the hardest things to get used to. Scott found himself jet lagged for a couple days due to the nine hour difference in time. He loved the food but found that Indians put spices in everything. “One time I ordered a drink at an Indian restaurant that was full of spices,” said Scott.

Scott observed that many Indians are very conservative when it comes to water and electricity. “Since these things are in short supply and very expensive to obtain people generally do not waste them.” People take baths out of buckets to conserve water.

Although Scott took classes at HU that gave him a solid understanding of Hindi, the language barrier was still Scott’s biggest obstacle. “It was difficult to understand and talk to the people.” As the program progressed, Scott learned more Hindi, and was eventually able to communicate with the natives.

“I decided to study abroad because I really wanted to experience a culture different from American culture. I figured the best way to do this was to travel to another country and learn the language,” said Scott.

-Jalisa Stanislaus is a print journalism major who is interning at the office of University Relations at Hampton University this summer.

Posted by Hampton University News at 10:27 AM