Sara Quinn, a multimedia expert with the Poynter Institute, will conduct one and a half days of workshops focusing on topics in multimedia at the HU Scripps Howard School of Journalism and Communications on Jan. 28 and 29.
On Jan. 28 from 2 p.m.- 4 p.m., Quinn will lead a discussion to include storytelling across platforms and visual thinkings. There will also be a brainstorming session to develop ideas for photos, graphics, video, audio, mumeracy, data visualization and conceptual illustration. She will also present strategies on the best tools and most effective ways to integrate them into a report. These include interactivity, video, audio, social media, blogging and more.
On Jan. 29, sessions will be held from 9 a.m. - 4:30 p.m. for faculty. The sessions will focus on teaching multimedia across the curriculum and social media skills.
Interim Dean Rosalynne Whitaker-Heck is looking forward to the sessions. “Faculty and students in any top-ranked journalism and communications program must continually enhance their knowledge and skill set to maintain pace with the media industry’s demand for multi-skilled graduates, and who better than Sara Quinn from the Poynter Institute to share her expertise with us?”
The Poynter Institute is an advanced studies institution located in St. Petersburg, Fla. Poynter aids in the development of skills or experienced journalists, future journalists, and teachers of journalism. Quinn is director of Poynter’s EyeTrack07 research project, co-author of “Eyetracking the News,” director of a six-week Summer Fellowship for Young Journalists and a contributor to Poynter Online.
Posted by Hampton University News at 1:12 PM No comments:

The march began at Emancipation Oak and concluded at Ogden Hall. 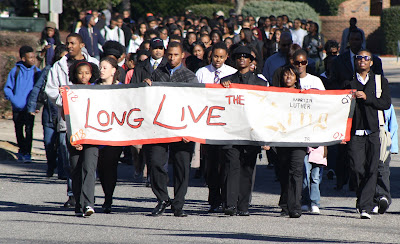 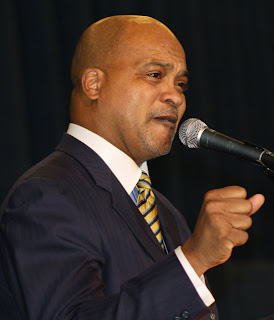 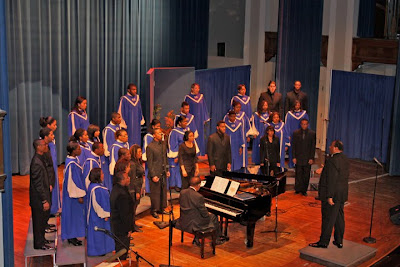 The Hampton University Concert Choir has been invited to perform at the Inauguration of Virginia Governor-elect Robert F. McDonnell. The inauguration will take place on Jan. 16 in Richmond, Va., on the steps of the Virginia State Capitol. The choir will perform between 10:30 a.m. – noon.

“Governor McDonnell is a true representative of service, honor and dedication to improving the way of life for the citizens of Virginia. I am proud for Hampton University to be a part of this historic, inaugural event,” said HU President Dr. William R. Harvey.

The HU Concert Choir, comprised of nearly 40 talented students, will perform in 20-minute sets alternating with the 29th Division Band. They will sing a diversified program of anthems and spirituals, including Roland Carter’s arrangement of “Precious Lord.”

“Historically, choirs have not been involved in the state’s gubernatorial inauguration, so this is truly a great honor for Hampton University to be invited in the celebration,” said Royzell Dillard, director of the HU Choirs.

The HU Concert Choir is the primary touring ensemble for the university. Established in 1870 as the Hampton Singers, this group has distinguished itself by performing in some of the most honorable concert halls and churches in the U.S. and abroad, including Carnegie Hall, the Kennedy Center and St. Patrick’s Cathedral. In 1997, the choir performed at the Inauguration of U.S. President William Jefferson Clinton. 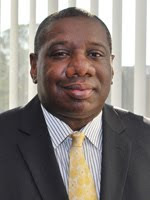 Located in the Virginia Beach Town Center, the College of Virginia Beach opened Sept. 2, 2003. It offers undergraduate degrees in nursing and hotel/resort management and graduate degrees in education as well as education certification programs. For more information about the college, go to http://www.cofvb.hamptonu.edu/programs/ or call 757.637.2200.
Posted by Hampton University News at 1:52 PM No comments: 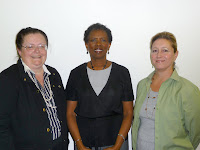 Hampton University was recently awarded two grants totaling more than $1.4 million from the National Science Foundation. The cross-discipline grants both seek to increase the production of minority professionals in the fields of science, technology, engineering and mathematics (STEM). Dr. Carolyn Morgan, professor of mathematics, is principal investigator for both grants.

HU received a NSF Educational Research grant of $565,441 to support Financially Oriented Research Calculus Experience (FORCE), a collaborative effort between the School of Science and the School of Liberal Arts. The grant will investigate whether the integration of financial applications into calculus courses significantly increase achievement for STEM majors. FORCE will support the university's Quality Enhancement Plan targeted at enhancing student-learning outcomes in mathematics and financial literacy.

"Students often come to the classroom thinking that they want to be engineers, but have no idea what that entails mathematically," said Morgan. "It's going to be a very interesting project."

Morgan, along with co-principal investigator Dr. Anne Pierce, director of humanities at HU, will conduct mixed-methods research by integrating topics of finance into MAT 151 and MAT 130 Calculus I courses, taken by business and sciences majors. Using a base-line methodology, results of this research will have a broad impact on the enhancement of calculus reform, contributing to the body of evidence that increased academic achievement in calculus is a significant factor in retention of STEM majors.

HU also received a five-year NSF Robert Noyce Teacher Scholarship Program grant in the amount of $840,881. This grant is a collaborative effort between the School of Science and the College of Education and Continuing Studies. It aims to prepare STEM undergraduates and professionals to become K-12 science teachers in high-need, economically disadvantaged public school districts. The grant intends to ensure that more minority students will join the ranks of highly qualified STEM teachers.

As co-principal investigators, Morgan and Dr. Clair Berube of the HU Division of Professional Education will prepare 30 highly qualified undergraduates and career-switching professionals through scholarships, summer workshops, involvement in educational research and curriculum development, and attendance at local and national conferences. The grant will also provide integrated support services during the teachers' first through third years in the field. As an educational research component, HU will measure the effectiveness in attracting and retaining STEM undergraduates and professionals into the teaching profession.

"These grants are a collaborative effort highlighting Hampton University's emphasis on the importance of interdisciplinary grant initiatives," said Morgan.

Posted by Hampton University News at 9:31 AM No comments: