The eighteen-wheel trailer transformed into a museum led visitors on a thought-provoking historical journey.

Behind this incredible idea was Rodney W. Reynolds, who also sat down and spoke with HU professor Earl Caldwell during his live taping of “The Caldwell Café”.

“The idea of a mobile museum was very important to me because as a kid I was introduced to something like this on a lesser scale.” said Reynolds.

“I feel it’s important to emphasize African American history. I still remember scrapping snow from the path to the trailer on our first day doing this, Feb 2008 in Detroit.”

In 2001, he joined with New Millennium Studios to launch American Legacy Television, which aired in syndication around the country.

Reynolds has received numerous accolades, including the Forty and Under Award, the Lillian Award, and the National Business Leader of the Year Award for his outstanding contributions in emphasizing African American history.

Posted by Hampton University News at 9:41 AM No comments: 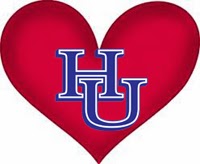 HU is a campus filled with proud students and faculty/staff who are happy to say, "We Love You HU!"

We present HU with the gift of thanks and appreciation in a Valentine's Day video that can be seen on YouTube or watching below.

Posted by Hampton University News at 8:39 AM No comments:

HU senior Mariah Crews is interning with NBC Universal for the Winter Olympics in Sochi, Russia.

Crews is part of a select group of Emma Bowen scholars who are attending the Olympics to work as media interns. The Emma Bowen Foundation for Minority Interests in Media is a multi-year internship program for students pursuing careers in the media industry.

Crews, a senior broadcast journalism major from Upper Marlboro, Md., has garnered so much experience during her internship, and it’s only her second week.

“I have met a multitude of athletes and will be working closely with Team USA," said Crews, “Meryl and Charlie [of Team USA- Ice Skating] are definitely taking home the gold.”

Her internship started in Venue Operations dealing with logistics under the guidance of a variety of broadcast managers for sports like speed skating, figure skating, and hockey.

And now she is working with the online department, NBColympics.com.

“I am working on several projects, but we are not allowed to go into detail or release pictures until after the Olympics,” said Crews.

Prior to this, Crews has interned at C-SPAN for the past four summers, as well as contributed as an active member of the National Association of Black Journalists, Golden Key National Honors Society, the Student Leadership Program at HU, and Gamma Iota chapter of Delta Sigma Theta Sorority, Inc.

She also started her own mentoring program called B.O.S.S, which stands for "Beauty, Originality, and Self-Worth Students."

“The wealth of knowledge I have gained from my professors at HU has definitely prepared me for this incredible opportunity,” said Crews.

Posted by Hampton University News at 4:29 PM No comments:

The ancestral remembrance ceremony commemorated the nearly 2 million Africans who perished in the  Middle Passage of the transatlantic human trade.

Leonard and Dawkins, both invited committee members of the event, played a big role in helping inaugurate guests from all across the nation.

“The day of the event was quite spiritual," said Leonard,"which only added to the importance and significance of the endeavor."

Posted by Hampton University News at 9:10 AM No comments:

The Scripps Howard Foundation announced HU junior Brandon Theo Dorsey as one of the nine top journalism students in the nation being awarded an all expense-paid journalism study trip to Japan.

The competition pays homage to the memory of journalists who led the Scripps Howard Newspapers and United Press in its beginning years.

This trip will challenge students’ assumptions about the world through an excursion in the Kansai region cities of Osaka, Kyoto, and Kobe, as well as explore the history behind Hiroshima and Tokyo.

Although Dorsey is a sports journalism major, he understands that the sports industry is becoming just as prominent internationally as nationally.

“At Hampton University, I’m surrounded by fellow students who are always trying to better themselves," said Dorsey, “This encourages me to do and strive for more—almost like a friendly competition.”

Dorsey, from Houston, TX, has had an impressive college career thus far.  He has interned at ESPN radio, the Washington Times, started his own website called Elite Insiders, and is preparing for a summer internship at NBC Sports. On campus, he is the online sports editor for The Hampton Script, and produces and anchors sports shows on WHOV-TV news.

Additionally, as a sophomore Dorsey was chosen among twelve of the best college sports journalists in the nation to attend the Sports Journalism Institute.  Here, he learned from top sports journalists like ESPN's Leon Carter, Sandy Rosenbush, and Stephen A. Smith.

“Really, all of this was God,” said Dorsey, “God hasn’t allowed me to forget that it is all Him.”

Despite Dorsey being accepted by Howard, Baylor, North Carolina A&T, and Florida A&M, he chose Hampton University because “Scripps Howard School of Journalism and Communications would provide me the best opportunity in what I wanted to do, and that’s journalism.”

“Professor [Allie-Ryan] Butler has taught me how to brand myself; my writing skills have improved under Professor [Mavis] Carr’s guidance; Professor [Wayne] Dawkins trained me in refining my writing to sound and look intelligent, but still appeal to readers; Professor [DaVida] Plummer coached me in TV work, and I can’t forget how Professor Jarvis has taught me to self-reflect and further grow as a man,” said Dorsey.

Travel begins May 8, and Dorsey admits that this is one moment in his life that he can look back at his work and think, ‘Wow, I’ve actually done some pretty good things to get here.’