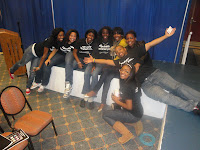 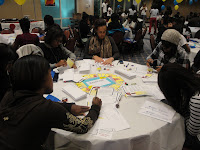 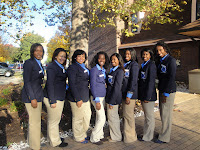 High school students and HU SRT members mesh during weekend
Seventy-one high school students spent the weekend at Hampton University as part of the school’s sixth annual Honors Visitation Weekend Nov. 18-Nov. 21. The weekend is an opportunity for future Hamptonians to view the campus, experience college life and become exposed to academic standards and expectations. Those selected to attend have already been accepted to HU, and hold a specific academic standing, which includes an 1100 or higher SAT score and a 3.5 or higher GPA that makes them eligible for university scholarships.

Students traveled from as far as California and as nearby as Virginia Beach, Va. The weekend, hosted by the HU Office of Admission, was flush with events, including academic sessions, a letter writing campaign to benefit St. Jude Children’s Research Hospital, a pajama party and a culminating scholarship ceremony and jazz brunch. At the latter event, sponsored by Embassy Suites, $957,000 was awarded to students, in varied amounts of four-year scholarships.

There was a little something for everyone, including parents, officials said. Students’ parents were provided tours of the HU Proton Therapy Institute, the university museum and visited Peninsula Towne Center.

“We wanted participants to get a full scope of Hampton University and we wanted the participants, and their parents, to feel rewarded for their successes,” said Melinda N. Gainer ’98, the event’s chief organizer and an HU assistant director of admission.

Gainer, who is also an adjunct professor in the HU Scripps Howard School of Journalism, had her event planning class coordinate the event’s logistics. Members of the HU Student Recruitment Team (SRT) helped coordinate the weekend by conducting campus tours for students and parents and planning the social aspects.

SRT members created the hash tag #HVW2010, so students could tweet throughout the weekend about their time on campus. Students’ frolicking on campus included residing in dorms, speaking with department deans and attending a fashion show. Attendees said the experience was an eye opener about college life.

Chrispus Saxon, of Wetumpka, Ala., said he enjoyed the weekend camaraderie and the, “interaction and being like a college student.”

Saxon, 17, whose mother is a Hamptonian, is set to major in Biochemistry in the Fall 2011. The weekend provided him with, “a better perspective of campus and of campus life,” he said.

The next Honors Visitation Weekend is set for Nov. 17-20, 2011. Gainer said her office looks forward to any opportunity to welcome potential Hamptonians, and create an ambiance that invites them back.

“With the upcoming Honors Visitation Weekend and any event our office hosts, we want to showcase all HU has to offer in the way of social scenery and academics,” Gainer said. “We take special care to ensure it’s a well rounded visit.”

For the third consecutive year, the Hampton University Scripps Howard School of Journalism and Communications welcomed members of the Associated Press Sports Editors (APSE) for a Day of Diversity on Nov. 9.

Student had the opportunity to share information and tips with reporters and editors from ESPN.com, USA Today, Daily Press, the Washington Post, Boston Globe and AOL Fanhouse.com. Such an experience will aid students as they prepare for careers in the challenging and evolving world of mass communications and journalism.

The day kicked off with a two-hour panel discussion with APSE journalists and moderated by Lynn Hoppes, senior director of ESPN.com. The panel answered questions about the future of journalism, internship opportunities and career advice.

Afterwards, students participated in a news conference with HU football coach Donovan Rose and then headed to the mock newsroom to write, edit and file their stories, videos and photos. Working under deadline, the students had the opportunity to work hands-on with 15 professionals, receiving feedback and advice along the way. The Daily Press website features several of the students stories.

Also for the third year, HU students competed for two $3,000 internship stipends and a $500 summer scholarship on behalf of the APSE.

Posted by Hampton University News at 1:17 PM No comments: 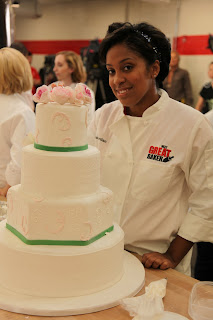 HU Professor featured on NPR's "Tell Me More"
On Nov. 30, Hampton Univeristy Assistant Professor Shonda Buchanan was featured on NPR's "Tell Me More." Buchanan, who is of North Carolina and Mississippi Choctaw Indian ancestry, joined historian William Katz to discuss the struggles some African American Indians face for acceptance amongst their kin.
Listen to the podcast:

Posted by Hampton University News at 11:49 AM No comments: