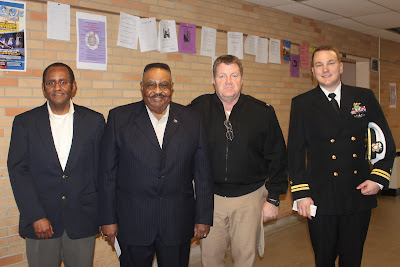 (L to R) CMC Melvin Williams, Sr.; ADM Melvin Williams, Jr.; Thomas Halley, commanding office of Hampton Roads NROTC consortium; and Lt. Austin Burkett of HU.
Hampton University welcomed father and son military leaders retired Admiral Melvin Williams, Jr. and retired Command Master Chief Melvin Williams, Sr. on Feb. 17. The two shared their nearly 60 consecutive years of military leadership experience with midshipmen in HU's Navy ROTC program.
The pair recently co-authored the book, “Navigating the Seven Seas: Leadership Lessons of the First African American Father and Son to Serve at the Top in the U.S. Navy.” They shared with the midshipmen tips on navigating through the ranks by employing what they call the "Seven Cs" of leadership: Character, Competence, Courage, Commitment, Caring, Communicating, and Community. The students asked several questions and enjoyed the visit.
Vice Admiral Williams, a 1978 graduate of the U.S. Naval Academy, served 32 years (1978-2010) in submarines, Fleet, and Joint assignments. His final assignment was as Commander, U.S. Second Fleet in Norfolk, Va. He has several military and civic awards for service and leadership. He resides in Alexandria, Va.
Master Chief Williams served 27 years (1951-1978) in submarines, aircraft carriers, and surface ships, with a final assignment as Command Master Chief. His many awards include the Meritorious Service Medal and six Good Conduct Medals. He resides in Temple Hills, Md. 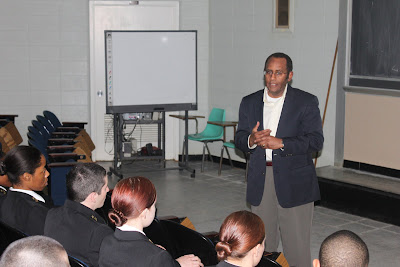 The Hampton Love Story: Couples Find Love at 'Our Home by the Sea'

She smiled as he gazed into her deep brown eyes. It was a beautiful autumn evening on the Hampton University waterfront – the full moon’s glow reflected off the slow tides as the crickets chirped harmoniously. The couple shuffled through the colorful leaves, holding hands just as they had during their freshmen year when they met. The pair had hit it off immediately – she, a “cutie” from Virginia Cleveland and he, a “too smooth” brother of Harkness Hall.

“So,” he said nervously. “These past four years with you have really been great. I love you a lot.”

“I love you too,” she said. “And I’ve loved every second with you.” Her mind flashed back to freshmen year – sitting on the bench by the waterfront until 10:59 p.m. every night before curfew. Sophomore year, when they were featured on the front page of the Hampton Script’s Valentine’s Day issue. Junior year, when they moved into Dubois Hall to be closer to each other. And now it was senior year; she was Miss Hampton University and he was the star quarterback on the Pirate football team. Everyone thought of them as a match made in heaven.

“I was wondering,” he said, slowly dropping down to one knee, hands shaking.

Her heart began to pound as he reached into his pocket, “Will you be my wife?”

“YES!” she exclaimed without hesitation as he slid the ring onto her finger. They hugged. “Wait,” she said, smiling. “I have one condition.”

She sighed happily. “We have to get married in the Chapel, just like our parents and grandparents did.” 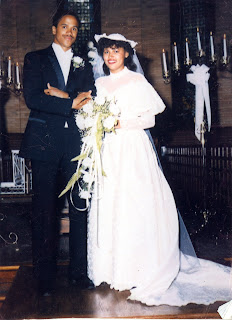 Sounds cliché, doesn’t it? While the story is fiction, many parts of it are reality for some Hamptonian couples. Take, for example, Coach Donovan Rose ’79, current head coach of the Pirate football team, and his wife, Dr. Sylvia Woody Rose ’81, of the School of Business. The couple met at Hampton in the late ‘70s – in classic fashion, he was a football star and she was a cheerleader, later to become Miss Hampton in 1981.

It took a game-changing moment to bring this pair together officially. After telling Dr. Rose that he was going home for the weekend, his plans took a turn (unbeknownst to her) when a friend asked him to see a play that night:

“I was in Armstrong theatre watching a play with one of my boys,” said Coach Rose. “Another girl was up there and just as I started talking to her, Sylvia came and saw us. When we made eye contact, she spun around and started running and I jumped up and started chasing after her. I chased her across campus and finally caught her – I was all out of breath trying to talk to her.”

“I knew when he chased me that he was serious about us,” said Dr. Rose. “That was when I knew he really cared.”

“I’ll never forget when I met her she told me ‘I don’t know what you’re used to but I’m different,’” Coach Rose recalled. “And she was right. She was smart, attractive, athletic and involved. She’s my best friend.”

After beginning their careers in professional football and law, Coach and Dr. Rose got married in the University Chapel and hosted their wedding reception in the Catherine House located on the campus waterfront. Continuing their legacy, both have returned to their alma mater to coach and teach.

A Match Made in Design Heaven 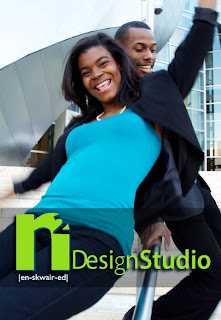 Nikkolas Smith ’08 graduated with a degree in architecture and a job in “Imagineering” at Walt Disney Studios. He married his college sweetheart, Nicole Knight Smith ’09, at the Hampton Convention Center the day before her graduation from Hampton.

“I literally got married, then ran across Ogden Circle,” laughed Nicole.

Known as the architect couple, or Charles and Ray Eames of Hampton University, they got to know each other during their countless hours working in Bemis architecture labs. After secretly liking each other for two years, a mutual friend set them up on a blind date on the eighth floor of Dubois Hall.

“She set-up a dinner and blind-folded both of us,” said Nicole.

“We kind of knew she was setting us up,” said Nikkolas. “But I think that might have been the day I knew [Nicole] would be my wife.”

The pair and a classmate were sent to Anaheim, Calif. during their fourth and fifth years to compete in the Disney Imaginations competition. Though they did not win, together, they were able to network and position themselves as up-and-coming designers. The couple now lives in California and own their own business called “NSquared Design Studio.”

Destiny at the Waterfront 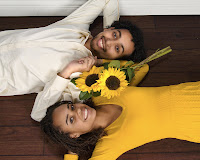 Nadia Guy ’11, a senior nursing major from Cleveland, Ohio, had a feeling her boyfriend of three years, Gheric Speiginer ’11, was going to propose to her when he brought her to the waterfront after dinner one day in November.
“We went to dinner at the cafeteria but Gheric was acting really giddy,” said Nadia.
The couple returned to the same place they had walked on their first day meeting each other. On that day during their freshman year, the couple recalls feeling drawn to each other at first sight.
“We randomly walked to the Chapel and he played the piano for me,” Nadia recalled. “Then we walked the entire waterfront.”
After less than three hours of knowing each other, Gheric asked Nadia to be his girlfriend. The following day, Nadia recalls being rushed to the hospital for an illness. To her surprise, her new boyfriend found a ride and was by her side within two hours.
“I wasn’t expecting him to come,” said Nadia. “I was glad he did.”
After being almost inseparable for four years, Nadia and Gheric are getting married after graduation, in July of this year. 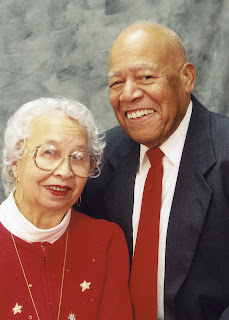 The “Hampton love story” dates back earlier than many realize. Mr. Clarence “Jap” Curry ’41 met the love of his life, Sadie Mann Curry ’43, in 1937. At the time, he was an agriculture major living at home in Newport News, Va. and she was a junior at Phenix High School, the only high school for blacks in Hampton (now Phenix Hall). Introduced by a mutual acquaintance, Mr. Curry recalls taking her to a fair on their first date.

Mr. Curry’s favorite memory with Mrs. Curry was going to visit her in Virginia Cleveland Hall during the dorm’s “Hospitality Hour.” At the time, girls were not allowed to walk past Clarke Hall to the male side of campus.

“They would sometimes allow boys to come to the lobby of Virginia Cleveland to talk to the girls,” he said. “They would hold little dances on Saturday night.”

He also recalls walking with her to the daily mandatory vespers in Ogden Hall. A saxophone and clarinet player in the marching band, symphony orchestra and jazz band; Mr. Currie was fortunate to have the opportunity to be a bandmaster in South Carolina upon graduation. Instead, he took a job at the local post office and married Mrs. Currie in 1942 before she graduated from Hampton.

Advice for Making It Work

Of the couples, all say that they did not expect or intend to find love at Hampton. However, for those fortunate enough to make a connection with a classmate, the couples offer some words of wisdom and advice for making it in college.

Nicole Smith said, “This one of those opportunities that you don’t get often in life to get to know a person inside and out. Really focus on getting to know each other and know the difference between romantic love and unconditional love. It’s about building a solid foundation.”

Did you find love at Hampton? Share your story!

Posted by Hampton University News at 11:29 AM No comments: