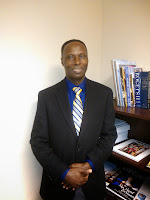 The purpose of the talk was to shed light on the disease and its manageability, said Ombengi, of his address to an audience of approximately 40 inside the Scripps Howard auditorium.

“I wanted to create awareness among the participants that people with diabetes can live a healthy and productive life if identified early, and effectively managed by lifestyle modifications and appropriate drug therapy,” he said.

Ombengi’s work at HU involves this type of healthcare delivery and economic analysis. Among other courses, Ombengi coordinates and teaches cardiovascular, pulmonary and endocrine portions of Drug and Disease Management, and Health Care Administration I and II. He also serves as Clinical Faculty and Preceptor for the Advanced Pharmacy Practice Experience (APPE) in Ambulatory Care at the Community Free Clinic of Newport News, where he also provides Medication Therapy Management (MTM) to patients at the clinic. His research interests include evaluating health outcomes of treatments used in cardio-pulmonary disorders, diabetes and other chronic disease with a focus on strategies to eliminate health disparities.

The latter statistic makes HU a good environment to facilitate this type of work, Ombengi said.

“Considering that diabetes is more prevalent in the minority population, we at HU can take proactive steps to stop the devastating clinical, humanistic and economic impact due to complications of diabetes through health literacy campaigns one person at a time,” he said.

-Leha Byrd
Posted by Hampton University News at 11:44 AM