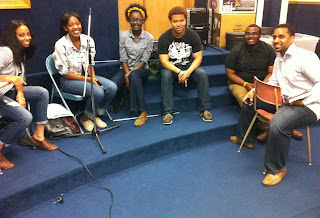 Contestants and their coaches taking a break from rehearsal to smile for the camera. Chelsea Balentine (First Hampton Idol winner and vocal coach), Arquilla Burks, Zainab Mustapha, Malcom Scott, Apollo Simon (Vocal coach), and Jordan Johnson
__________________________________________________________
“Hampton Idol” kicks off HU Homecoming Week
Although Hampton University has a strong culture for music, there are many underground musicians that go unnoticed. In 2009, HU’s Student Leadership Program created Hampton Idol, a singing and rapping contest devoted to recognizing some of the school’s hidden talent.
In the beginning of the first Hampton Idol competition, contestants performed in the Student Center atrium for the first round of auditions, and went through a closed audition before making it to the show. Contestants were informed that they made it past the auditions, and worked with musicians to get arrangements and performances together. After two short weeks of rehearsals, it was show time.
Hundreds of students, including myself, packed Ogden Hall to witness the first Hampton Idol. The atmosphere oozed with positive vibes, and the stage showcased major talent. The show consisted of two parts; one portion was dedicated to singers, and the other portion was dedicated to rappers. Contestants got a chance to perform one song of their choice for the first round, then, celebrity judges eliminated three contestants from each part. The remaining two contestants got a chance to go head to head in the final round and received critiques from the judges. Amazing vocalist and senior, Chelsea Balentine was named the Hampton Idol winner for the singing portion. Quirky and well- known rap group Earth Gang emerged as the Hampton Idol winner for the rap portion.
Last year was the second showcase of Hampton Idol, and the performances were bigger and better. Singing group Emphasis wowed the crowd with a theatrical interpretation of the Bruno Mars hit “Billionaire,” and seduced Hamptonian women with a dance break during Destiny’s Child song “Cater to You.” Emphasis is an all male group composed of four juniors and one senior. Sophomore rapper Chemist enticed the crowd with his smooth rhymes during his performance. Emphasis and Chemist emerged as the two Hampton Idol winners for 2010.
The competition this year contains some heavy hitters in the singing category, including the go-go band’s lead singer Zainab Mustapha, and well-known campus singers, Jordan Johnson and Scotte Johnson.  The rappers this year include some previous contestants, and all have slick rhymes and punch lines, but must work the crowd well in order to win.
Students are anxiously waiting to see what talent HU has to offer this year. The competition is scheduled for 7p.m.  Oct. 17. in Ogden Hall and kicks off homecoming week. Tickets are on sale for $3 and are selling out fast.
As the competition approaches, contestants are working hard to put the finishing touches on their performances. Pre-judging this year’s show, I predict the contestants will make it hard for the judges.  Keep up with the HU blog site for the announcement of the 2011 Hampton Idol winners.
-Morgan Gusby
Posted by Hampton University News at 12:09 PM