Back by Popular Demand! Dreamgirls back in full force

Back by Popular Demand! Dreamgirls back in full force 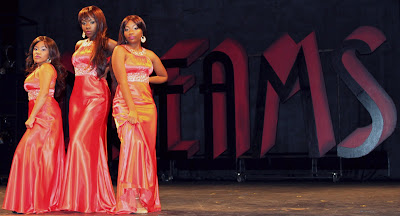 Dreamgirls, this popular movie and stage play, garnered rave reviews by the Hampton University community. Students and staff have flocked to the sold-out shows last March put on by the Hampton Players and Company and were thrilled that it would be brought back Oct. 12-16 as an encore production.
This is not the first encore production that has been done by the Hampton Players. Recently, the original musical, “A Love To Call My Own” was brought back after an overwhelming box office response. After selling out of all 12 performances last year, Dreamgirls is back for those who were unable to see it or want the opportunity to see it again.
Under the direction of Dr. Karen Ward and the work of the Hampton Players, this year’s production of Dreamgirls will be sure to deliver just as it has previously. For one week, audiences will continue to be amazed by the scenes and costumes of the show. There were over 250 complete costume changes last year and this year’s production will include even more, along with some additional breathtaking pieces.
Ward, chair of the department of Fine and Performing Arts, is very pleased that the production had such a great reception. With the new additions and dynamics for the show, it is sure to keep one entertained.
“The spectacle of the show was one of the highlights of Dreamgirls last year and we have added even more spectacle elements this year including special effects and pyrotechnics that will have our audiences wondering, “How did they do that?” said Ward.
This production would not be anything without its cast. They are the true essence for a show. Past and present cast members for Dreamgirls have enjoyed their experience and the bonds that developed. Ashley Garcia, who is a freshman this year, has enjoyed working with the other cast members and her experience with the play.  Garcia chose to audition because she thought it would be a great way to get involved and she is interested in entertainment. She also has never been in a play before and thought it would be something new. Even with this being her first year in the play, she has been able to transition.
“The cast is very disciplined and serious about their roles,” said Garcia. “They are exciting to be around and have been very helpful.”
Past and present cast member, Jade Banks, has enjoyed her experience as well.
“I have met a lot of different people and it has been a really good experience,” said Banks. She also has enjoyed getting to know the freshman cast members and showing them the ropes. This will be Bank’s second year in the production playing the role of Deena. When asked about her role,
“It has been very challenging but rewarding,” said Banks. “It is a lot of big shoes to fill…Sheryl Lee Ralph, who played the role on Broadway and Beyonce’ Knowles, who played the role in the movie.”
The production will be held in the Armstrong Hall Little Theatre.  It will run from Oct. 12-16 and begin at 8 p.m. and matinees (Saturday and Sunday) beginning at 3 pm. Tickets are $15 for general admission and $12 for students/seniors.  HU students are free.
If you missed it the first time, you definitely want to catch it the second time around!  For tickets call (757) 727-5236 and for questions or information regarding the production, contact Dr. Karen Turner Ward-  (757) 727-5402/5416.
- Stephanie Arterbery
Posted by Hampton University News at 9:25 AM