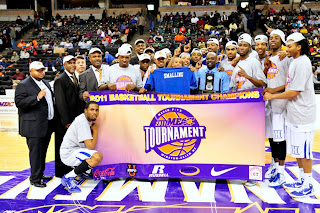 The Hampton University campus was a buzz this week, celebrating the Pirates and Lady Pirates trips to the NCAA tournaments. For the first time in University history both basketball teams are MEAC champions in the same year and both are going dancing.

March 13 kicked off the celebration week with the men’s basketball team selection party. The Pirates were chosen to be the 16th seed and they will take on Duke today at 3:15 p.m.

“Being from North Carolina college basketball has always had a special place in my heart. I’ve never been so proud of our basketball program or so excited for the NCAA tournament,” said junior Raven Powers.

Many other students have been tweeting their congratulations to the teams.

“Congratulations to my Hampton Pirates, whether they win or lose they are still winners in my book!” said freshman Chazz Scott.

During the pep rally sponsored by the SGA on March 15 the players were excited about their victory and to celebrate with their fellow Hamptonians.

“All of the hard work paid off. It was a total team effort from everybody. Friday we expect that we do not have anything to lose. They are no different form us besides the name on their jersey. Anything is possible,” said junior forward Bakari Taylor.

Later on that evening the women’s basketball team announces their seat during their selection party. They were excited to be seeded 13th and playing against Kentucky on Saturday at 6:30 p.m. in Albuquerque, N.M.

Senior Laura Lewis expects “for [them] to go out and play hard and to just keep doing what have been doing. “

Junior Jericka Jenkins said, “I expect us to come out playing hard and actually win the game because we all believe that we can win.”

The manager of the men’s basketball team junior Rob Nicholson said, “I’m very excited about this upcoming weekend for men’s and women’s HU basketball. Both teams have put in tremendous work to get here and if they play smart and to the best of their abilities I expect them to shock the world.”

Posted by Hampton University News at 9:42 AM