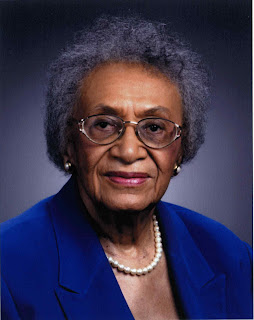 The National Association for the Advancement of Colored People National Board of Directors announced that attorney and Hampton Alumnus Frankie Muse Freeman ’37 will be honored with the Association's Spingarn Medal, the NAACP's highest honor. Freeman will become the 96th recipient of the award, and she will be honored during the NAACP National Convention in Los Angeles July 28 at the annual Spingarn Dinner.

After graduating Hampton Institute and Howard University Law School, Freeman began her career serving the state of Missouri and the city of St. Louis. She continued as a practicing attorney in state and federal courts for more than 60 years. During this time she helped the NAACP in the case of Brewton v. Board of Education of St. Louis, and later represented the NAACP in the landmark case Davis et al v. the St. Louis Housing Authority, which ended legal racial discrimination in public housing.

“Frankie Muse Freeman has dedicated her life’s work to the civil rights movement,” stated NAACP Chairman Roslyn M. Brock. “She broke down barriers as a member of the NAACP’s brain trust during the 1950s and as the first woman to serve on the U.S. Commission on Civil Rights. Her determination to end racial discrimination in American society for more than half a century serves as an inspiration to us all.

The Spingarn Medal, instituted in 1914 by then-NAACP Chairman Joel E. Spingarn, is awarded for outstanding and noble achievement by an American of African descent during the preceding years.

“We are honored to give Frankie Muse Freeman the highest award that our 102-year old organization can bestow," stated NAACP President and CEO Benjamin Todd Jealous. “As a premiere advocate for African Americans over the past six decades, Freeman embodies the NAACP’s core values. Her record of success is a testament to her competence and resolve.”

“I have been a member and engaged with the NAACP for more than 60 years,” said Freeman. “It is with a great sense of pride and humility that I accept the 96th NAACP Spingarn Award to be presented on July 28, 2011, during the 102nd Annual NAACP Convention in Los Angeles, California.”

In March 1964, President Lyndon B. Johnson nominated Freeman as the first woman to serve as Commissioner of the U.S. Commission on Civil Rights, a federal body that investigates complaints alleging discrimination. Freeman served on the commission for sixteen years, subsequently reappointed by Presidents Nixon, Ford and Carter, until July 1980. She also served as Inspector General of the Community Services Administration during the Carter Administration. In 2003, Freeman published a memoir, A Song of Faith and Hope: The Life of Frankie Muse Freeman.

“This year’s Spingarn Medalist, Mrs. Frankie Muse Freeman, who was a practicing attorney for more than sixty years, has had a career of singular accomplishment from her appointment by the late president Lyndon B. Johnson as the first woman to serve on the United States Civil Rights Commission, a post she held for sixteen years, to successfully representing the NAACP in landmark cases re segregation in education and housing,” added Jesse Turner Jr., Treasurer of the NAACP Board of Directors and Chairman of the NAACP Spingarn Committee. “Throughout her career she has been a devoted NAACP civil rights leader and acclaimed for her continuing outstanding community service. The 96th NAACP Spingarn Award is a richly deserved tribute, which we are proud to bestow upon her.”

Freeman has received numerous accolades for her life’s work, including a number of honorary degrees and induction into the National Bar Association’s Hall of Fame and the international Civil Rights Walk of Fame. She has a distinguished history of volunteer service. She is past chair of the Board of Directors of the National Council on the Aging, Inc. and serves on the executive committee of the St. Louis City NAACP, and many other organizations.

Founded in 1909, the NAACP is the nation's oldest and largest civil rights organization. Its members throughout the United States and the world are the premier advocates for civil rights in their communities, conducting voter mobilization and monitoring equal opportunity in the public and private sectors.