Students Give Back through Entrepreneurship

While most students attended last week’s Career Fair in the hope of gaining employment, other students were busy working on their own businesses. Through hard-work, passion, research, legal paperwork, financial investments and plenty of patience, a few Hampton University students have already spun their dreams of entrepreneurship into realities.

For Kevin Matthews, owner and CEO of BuildingBread, LLC (a company that educates and informs on financial literacy), it was no easy task. 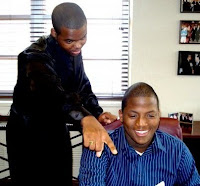 “I’ve been researching for years,” said Matthews, a junior economics major from Tulsa, Okla. “I’ve created my own library of books, called friends for help, got legal and professional advice from professors and took a chance.”

Matthews was drawn to start his business after learning the value of money from his father. As a child, he saved enough of his weekly allowance to buy video games. As a teenager, he saved enough to buy his first car…and then his second…and then his third- which he fixed up and sold at auctions. By the time he was 18, he bought his first house. With his personal experience, an internship at ING Investment Management last summer and personal research, Matthews is trying to give back by sharing his knowledge of financial literacy with others. 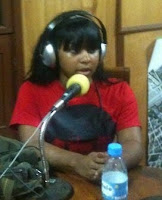 Also with dreams of giving back, sophomore business major Megan Schmidt (better known as ‘Cupcake Meg’) is the creator of the Brooklyn Capital for the Children Foundation. Schmidt, who is preparing to celebrate the one-year anniversary of selling cupcakes at Hampton on October 11, says that the cupcakes are the least of her story.

“All I wanted to do was raise money for my foundation so that I could provide for the communities that I am trying to help,” said Schmidt. “Selling cupcakes and t-shirts is how I’m feeding my foundation.”

The communities Schmidt has set her sights on are no easy fix. The first, in Belize City, Belize, is a community ravaged with youth violence. Schmidt is hoping to help by giving assistance to the Dorothy Menzie’s Childcare Home for orphans. Schmidt also visited Togo, West Africa; where, after seeing the state of the country’s youth education programs, she was inspired to build a school. Schmidt’s limitless dreams and ability to network has allowed her to shake hands with people such as the CEO of Pepsi, Pharrell, Jeremih and Ecko Red fashion designer Lee Wilke. With the help of her mother, her “street team” and numerous supporters, Schmidt is inspiring many by trying to “make the world sweeter,” one cupcake and one community at a time. 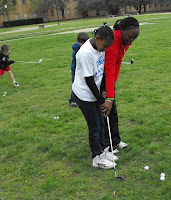 Junior Sydnee Mack, a public relations major from Las Vegas, began her non-profit business (Tee it Up Golf), in partnership with her older sister. Mack, a member of the University’s golf team and a nationally-ranked player decided to begin the organization to give back to a community to which golf is not an easily-accessible sport.

“The goal of my organization is to expose underprivileged children and teenagers to the sport and make them comfortable on the course,” Mack said. “Golf is one of the languages of business and my business helps kids understand the game and also encourages them academically and socially.”

With such a noble venture, it is not surprising that Mack was presented with the Special Benefactor Award, last year. The award is a grant given to a student to provide an international experience. With the help of Professor Erica Woods-Warrior, Mack won the award and has been given the chance to continue her business abroad. Mack has chosen to open her business in Germany; the site will launch in May 2011.

These young entrepreneurs are only a few of the many around Hampton’s campus, but a striking similarity exists in their giving spirits. As for advice to others who would like to start their own ventures, they offer these words of wisdom:

1. Know your market.
2. Become an expert in your field.
3. Use your resources (professors on campus have a wealth of knowledge).
4. Be patient.
5. Know what you can realistically accomplish.
6. Be professional; as young as we all are, no one will take us seriously if we do not take ourselves seriously.
7. Realize how and where you’ll get your money and be prepared to spend just as much.
8. Have a thorough plan.
9. Be brave.