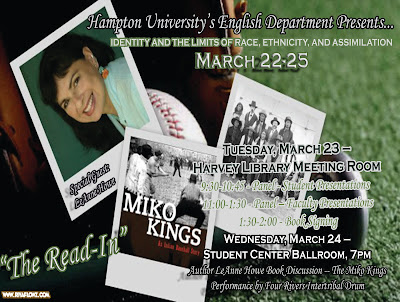 Hampton University’s Department of English welcomes LeAnne Howe, author of “The Miko Kings,” to the campus for the university’s Annual Read-In Event on March 24 at 7 p.m. in the Student Center Ballroom. The event is free and open to the public.

Howe will read excerpts from “The Miko Kings,” provide a brief discussion on federal Indian policy, and also discuss the writing process. The event will also feature a performance by the Four Rivers Inter-Tribal Drum group.

Howe is a citizen of the Choctaw Nation of Oklahoma and a professor of English and American Indian studies at the University of Illinois at Urbana-Champaign. Her first novel, “Shell Shaker,” received an American Book Award in 2002. Visit her blog at http://mikokings.wordpress.com/.