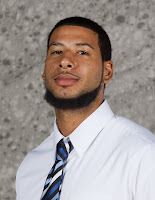 The Hampton University community mourns the loss of Theo Smalling. Smalling died on Monday, Oct. 26 at approximately 8:40 p.m. at the age of 22. Smalling, captain of the HU Men’s Basketball team, was involved in a senseless accident on Oct. 24.

“Theo was the model for the term student athlete. He was a terrific student, an all-star athlete and a good human being. In addition, he was actively involved in a great deal of community service. I and the Hampton University family will truly miss him,” said HU President Dr. William R. Harvey.

“This is a devastating loss for our community,” said HU Men’s Basketball Head Coach Edward Buck Joyner. “He was a great young man who was an assest to Hampton University on and off the court. Not only was he the captain and leader of our team, but the backbone of our team. He will be with us in our hearts and minds when we step on the court.”

Lonza Hardy, Jr., Athletic Director added, “We are all deeply saddened to hear of the loss of Theo. A student athlete we saw grow and mature into an individual who made us all proud.”

Theo Smalling was a leader on and off the court at HU. He was a senior sports management major and was in line to graduate this spring. He played in 91 games for the Pirates, making 76 career starts. As a junior, Smalling led the team in rebounds, averaging 5.3 boards per game, recording a career-high 14 rebounds on Jan. 12, 2009 at Florida A&M. Smalling’s career high of 15 points came Dec. 22, 2007, when the Pirates played at Maryland-Baltimore County. He blocked a career-high five shots Nov. 21, 2006 against George Mason, and he blocked another four shots against Virginia Commonwealth last season.

Though he was born in Boston, Mass. to Carl Smalling and Shelley George, Smalling called Tampa, Fla., where he played his high school ball at Bloomingdale High, home. He averaged 18 points and 10 rebounds a game as a senior earning All-County and All-State Honorable Mention honors. Smalling is Bloomingdale’s all-time leading scorer with 1,239 points.

Posted by Hampton University News at 10:18 AM